MORGANTOWN – Bartlett House is answering accusations that range from bed bugs to sexual harassment by staff, made by the group of advocates supporting the homeless encampment currently setup on city owned property in Morgantown’s Greenmont Neighborhood.

“I was completely just disheartened and in shock,” Bartlett House President and CEO Keri DeMassi said after she learned of the accusations being made.

Bartlett Housing Solutions is a non-profit that provides temporary housing to individuals while connecting them with services to help break the cycle of homelessnes.

A release from a local advocacy group calling itself “Justice For Diamond Village,” claimed people living in the camp refused to go to Bartlett House because of sexual harassment by staff. DeMasi stated that when the group was pressed for more information about the allegations, so she could follow up, no specific information could be provided.

“As a matter of fact, I’ve asked for the names of staff members, specifically what happened and I still do not have names,” DeMasi stated.

With other rumors also swirling around Bartlett House, the non-profit’s administrators issued a release Thursday afternoon addressing and debunking each of the claims floating around town. The release debunks claims rules prohibit some people from using it, a purported “banned list”, sexual harassment and Centers for Disease Control guidelines regarding encampments.

(click here to read the full release from Bartlett House)

DeMasi also dispelled any rumor that Bartlett House does not have room to assist any more individuals. Demasi told WAJR Bartlett House was not at capacity and there is plenty of space in all programs.

“We’re tired. We’ve worked so hard and going on the guidance of the CDC. We’ve added beds, provided meals, took their temperatures, we’ve tried to do everything we can to protect our community’s most vulnerable and to hear these allegations is devastating.” 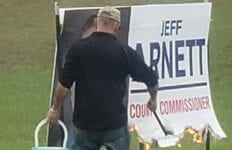