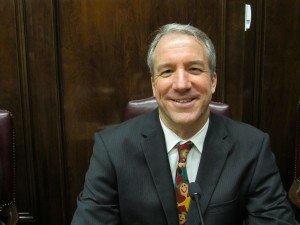 MORGANTOWN, W.Va. — It was a long but productive night for Morgantown City Council Tuesday during the Committee of the Whole meeting.

Eight items were discussed, including multiple ordinances that ranged from parking-districts to term limits for Council. One of the items receiving top billing Tuesday was an ordinance that would establish a tax credit for new and expanding businesses within city limits. The ordinance, which would give an eighty percent tax credit for any renovations or construction for new businesses up to $5 million, is expected to come before the full Council next month.

“We’re very eager to draw businesses in our community, especially our downtown area,” Deputy Mark Brazaitis said. “It’d be wonderful to see some great development in, say, lower High Street, and just our downtown and wharf in general.”

Another intention stated by council as a positive regarding the ordinance is that it brings annexation back into the discussion by allowing local businesses annexed into the city to get the benefits of the tax brake. Brazaitis, an open proponent of annexing several surrounding areas into the City of Morgantown, feels it gives an incentive for businesses outside of the limits to get into the fray.

“It makes that (tax credit) more exciting for businesses that want to enter into our city that want to be a part of our city,” he said. “So here’s an incentive, take a good look at it, and you may very well benefit from it.”

Even though most of the feedback was positive regarding the new incentive, there were also concerns addressed by Council which included the possibility of unintentionally allowing for out of state developers to take advantage of the opportunity. Brazaitis, feels that it doesn’t deter from local businesses.

“I think you’re going to see a lot of local businesses and state businesses being very excited about this, I don’t think it precludes this at all,” he said.

Another concern addressed by Council was regarding the minimum number of hired workers involved with local unions. One concern that was addressed by the Deputy Mayor was a potential violation of “Green Space,” which is considered by Council as a part of the economic force in Morgantown. As the ordinance continues to be worked out, Brazaitis hopes that to be part of the plan as well.

“We recognize ‘Green Space,’ which we do as a resource in our community that is going to help us economically, help us with our health and spirit too, but economically as well,” Brazaitis said. “And that we not make a mistake and knock down some precious woods that is not in our comprehensive plan.”

The local business tax ordinance is expected to be addressed by Council during a regular meeting in the near future.